Who is Millie Bobby Brown?

Millie Bobby Brown (born 19 February 2004) is an American actress and producer. She starred in and produced the mystery film called Enola Holmes (2020), and also starred in the monster film called Godzilla: King of the Monster (2019).

She gained popularity for her role as Eleven in the science fiction series Stranger Things(2016), which has been renewed for four seasons.

She has received two Primetime Emmy Award nominations for Outstanding Supporting  Actress in a Drama Series in 2016 and 2017 respectively. 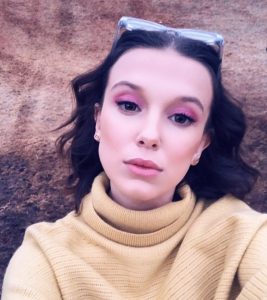 Where was Millie Bobby Brown born? Millie was born in Marbella, Spain on 19 February 2004. She attended Pokesdown Community Primary School.

She is 17 years old. Millie went to the Acting workshop in Bournemouth to pass time on Saturday, there Millie was scouted by the top Hollywood talent scout and met with the town’s top children’s talent agencies.

What is Millie Bobby Brown famous for?

Millie Bobby Brown has never taken an acting class or trained at a professional level. she made her acting debut as the guest star in the ABC fantasy drama series Once Upon a Time in Wonderland, playing the role of young Alice.

In 2016, Millie was cast to play the role of Eleven in the Netflix science fiction-horror series called Stranger Things.

Before landing her iconic role in Strange Things, she had a starring role in the BBS American paranormal drama-thriller series called Intruders as Maddison O’Donnell in 2014.

She has also received her second Emmy nomination for the role of Eleven from Strangers Things.

She also made her modeling debut in Calvin Klein’s  “by Appointment” campaign in January 2017.

After signing to the IMG Model agency in the summer of 2018, she appeared in the campaign of the Italian brand Moncler.

In January 2018, Millie was cast to star in and produce the film adaptation called The Enola Holmes Mysteries.

She was chosen to voice in the Darren Aronofskys’ virtual reality experience called Spheres: Song of Spacetime.

On 20 April 2018, she became the youngest person to be included in the list of 100 most influenced people in the world by Time magazine.

She was the youngest person ever to be appointed a UNICEF Goodwill Ambassador on 20 November 2018. 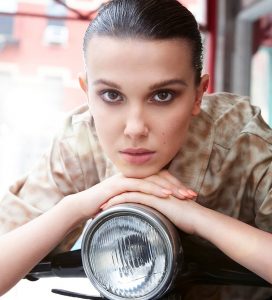 EA Games had announced that will Millie collaborated with The Sims 4 programmers to feature in The Sims 4 Positivity challenge in November 2018.

She was named by Time magazines as one of the most influential teens of 2017 and of 2018. Hollywood’s top thirty stars under age eighteen.

Millie made her film debut in 2019, in the sequel to Godzilla, called Godzilla: King of the Monster, and will reprise her role in Godzilla vs. Kong.

In the same year, it was announced that Millie will be starring in the film adaptation called The Thing About Jellyfish by Ali Benjamin as Suzy.

She also became the ambassador of UEFA’s in March 2019  with the #We PlayStrong  Campaign. She recently offered them a first-look deal with Netflix.

On July 28, 2020, it was announced that she will star and also produce through her PCMA Production as a suspense film called The Girls I’ve Been.

Who are Millie Bobby Brown’s Parents?

Millie’s father’s name is Robert Brown and her mother’s name is Kelly Brown. Robert and Kelly are reported to sell everything to move to Hollywood to help Millie become an Actress.

Who are Millie Bobby Brown’s Siblings?

Millie has three siblings: Charlie, Paige, and Ava, who is Millie’s younger sister. Millie and her sister Paige will co-produce ‘A Time Lost,’ a new Netflix film.

She weighs around 44kg and has short dark brown hair. Her eye color is also dark brown. And her zodiac sign is Pisces.

Where is Millie Bobby Brown from?

Millie is actually English despite speaking in an American accent in most of her roles.

She was born in Malaga, Spain to English parents, moved to Bournemouth when she was four years old, and then moved to Florida four years later. 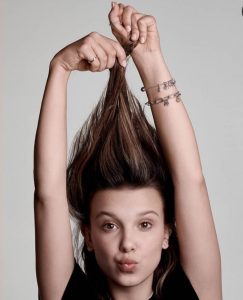 Millie and pop star Jacob took to Instagram with pictures of the two of them together, alongside heart emojis.

7 months later, the pair posted statements on Instagram stories saying they had broken up but were happy and remain friends. 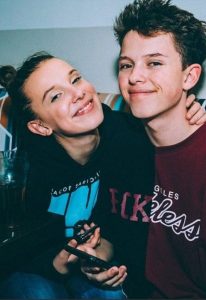 She is no longer active on the social network but her other account @millistopshate is still live and she occasionally posts inspirational quotes there.

How much is the net worth of Millie Bobby Brown? Millie is a popular American Actress who gained fame by playing the character of ‘Eleven’ in the Netflix show Stranger Things.

She has an estimated net worth of $10 million USD.

She has played role in many popular series and movies which has increased her fame.

With the continuation of her acting career, her net worth will keep increasing.